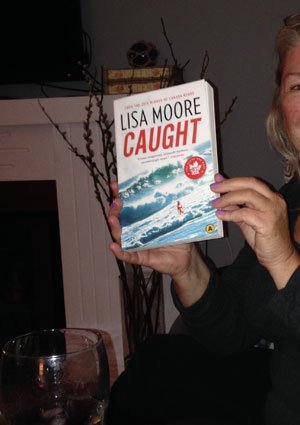 By Lisa Moore
Caught begins with a prison break. Twenty-five-year-old David Slaney, locked up on charges of marijuana possession, has escaped his cell and sprinted to the highway. There, he is picked up by a friend of his sister’s and transported to a strip bar where he survives his first night on the run. But evading the cops isn’t his only objective; Slaney intends to track down his old partner, Hearn, and get back into the drug business. Along the way, Slaney’s fugitive journey across Canada rushes vibrantly to life as he visits an old flame and adopts numerous guises to outpace authorities: hitchhiker, houseguest, student, lover.   ~ synopsis from Amazon.com

In the midst of torrential rains we ventured out in the dark. Risking life and limb, drenched by passing cars trying to cross Elizabeth Avenue to make our way to the first post-summer book club. … The need for danger and excitement. Much like David Slaney meeting with armed Columbian drug lords on deserted beaches and playing chicken with Mother Nature on the high seas. Saaaaammmmmmeeee thing (except for the nice warm socks, pizza, cupcakes and wine waiting for us once crossing the street ♥).

Caught by Lisa Moore made for a wonderful discussion tonight.  We all agreed that the writing was quite beautiful but had some differences of opinion about the characters. Some were rooting for the good looking and loveable Slaney while others thought from the start that he couldn’t seem to get out of his own way, and was and would likely always be, a bit of a skeet. Hearn really got people riled up. Most felt that he was a selfish asshole that used Slaney and cared little about him. Then there was the professionally frustrated, perpetually sweating Patterson. We all felt a little sorry for him.

We talked about how we would answer a grade 10 exam question about the significance of the title ….

You get the idea. Thinking it might have gotten us a B.

Our always prepared host had questions at the ready – they were a little too literary for this bunch. FYI… if you ever get a question with the word trajectory in it, the answer is ’12’ (you’re welcome). We had hoped to have a special shirtless guest at our meeting but despite the invitation, and being in town, PM Justin Trudeau did not make an appearance. He probably would have had a different answer for the trajectory question anyway.

We were thrilled to hear that Caught is currently in production as a mini-series and our own Allan Hawco perfectly cast as Slaney. My god he’s sweet!

Thank you to our host for a fabulous night. Until next time Wormies!