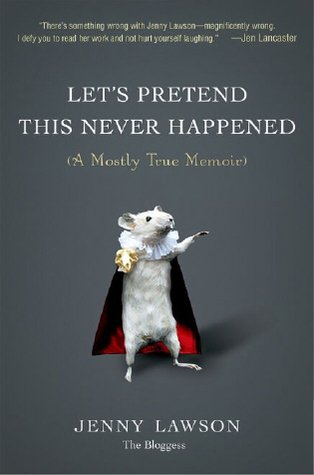 By Jenny Lawson
Jenny Lawson realized that the most mortifying moments of our lives—the ones we’d like to pretend never happened—are in fact the ones that define us. In the #1 New York Times bestseller, Let’s Pretend This Never Happened, Lawson takes readers on a hilarious journey recalling her bizarre upbringing in rural Texas, her devastatingly awkward high school years, and her relationship with her long-suffering husband, Victor. Chapters include: “Stanley the Magical, Talking Squirrel”; “A Series of Angry Post-It Notes to My Husband”; “My Vagina Is Fine. Thanks for Asking”; “And Then I Snuck a Dead Cuban Alligator on an Airplane.”    ~ synopsis from Goodreads

Everyone enjoyed this book although for some it was exhausting (and hilarious) trying to keep up with Jenny and her mind loop. Some of us experienced an embarrassing moment or two as we read the book on a plane (trying to keep a seat mate from seeing the chapter entitled Vagina), and burst out laughing in a grocery store.

There was a great deal of compassion for Jenny and perhaps even a little envy – what would it be like to just say and do what moves you, not to the same degree as Jenny of course but maybe like 10%. We talked about whether Jenny would have been able to cope with her anxieties had she lived in a big city with a ‘normal’ family rather than in a rural area with a some would say, wacky one. The consensus was that she would likely have ended up hospitalized or worse…

We talked about our own families and the wackiness that doesn’t seem that wacky when it’s what you know. Whether it’s turkey hand puppets, missing fingers or juice for your spruce, we all have our own stories that make us who we are. Our host may have to extend apologies to her neighbors for the racket through open windows on a Monday night. But it couldn’t be helped and we ‘could have cared less’ …. see what I did there? hehe!

Like Jenny’s swirling thoughts, we covered a lot of bizarre topics tonight: Ravens that can tell a Honda from a Hyundai when they come for supper, mice that love cat food, dog food and a good BBQ (there’s one for sale by the way!),  gargantuan spiders  – so big you can hear them walk away (sure …), sword swallowing gone bad, and plans for a summer book club outing to eat fire and throw axes.

It was a wonderful night. Thank you to our host for a really great meeting and yummy munchies – the homemade cookies ROCKED, and the wine… mmmm.  You done good Missus! Have a wonderful summer wormies!