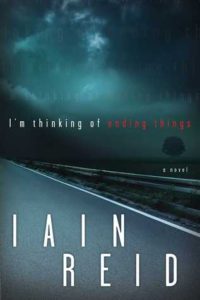 “You will be scared. But you won’t know why…

I’m thinking of ending things. Once this thought arrives, it stays. It sticks. It lingers. It’s always there. Always.

Jake once said, “Sometimes a thought is closer to truth, to reality, than an action. You can say anything, you can do anything, but you can’t fake a thought.”

And here’s what I’m thinking: I don’t want to be here.

In this deeply suspenseful and irresistibly unnerving debut novel, a man and his girlfriend are on their way to a secluded farm. When the two take an unexpected detour, she is left stranded in a deserted high school, wondering if there is any escape at all. What follows is a twisted unraveling that will haunt you long after the last page is turned….” ~ synopsis from GoodReads

The first post summer book club was a wild one. All hands were on deck to discuss I’m Thinking of Ending Things by Iain Reid.

To give you a feel for where this is going you might want to know about some pre-meeting discussions of this book. After reading the last page one member called another to say … What the F&%C!! While in a grocery store two particularly articulate book club members  began their conversation with…”A good book but it’s totally F&*ked Up!”

We all enjoyed this one (some of us even read it twice!), despite being slightly creeped out and more than a little confused. What was real, what wasn’t? Were all the characters with their hand licking, lactose intolerant, hair-pulling, metal tasting tics all a single person? Was the entire story written and left behind by the Janitor – a glimpse of what may have been had he asked for the girl’s number many years before.

We all thought the writing was wonderful. The account of the ‘narrator’s’ interaction with the neighbor – when she felt the most fear- it was so subtle yet we could all feel how terrifying that would be as as child.  At the school as the narrator sat in the car alone many of us could relate as we recalled a time or two where we had found ourselves in a situation and thought “oh shit….I shouldn’t be here, this is a baaaaaad idea”.

The consensus on this book – we’re so glad Alison chose it. We thank Alison for that and for the amazing hosting, as usual. She was moving around like a blue-arse fly keeping the food and wine coming AND managing to rein us all in with the discussion questions (somewhat at least). Superstar!!

We did get a little off-topic when it came to our discussion on secrets – we won’t tell that it was 5 not 2 or spill the beans on the incognito (PUBLISHED whoohooo!!) author in our midst. Secrets somehow led to our plastic surgery chat – you could be beautiful with a little work…ugh.. seriously? And most important of all – keep that belly fat, it might come in handy!

It was a blast wormies! Til next time..