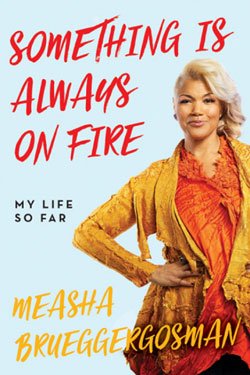 “Opera sensation Measha Brueggergosman has moved audiences around the world with her unique gifts. ..In this searingly honest and insightful memoir, Brueggergosman shares her experiences with music, but also her ongoing struggle to balance her ambition for a life fully lived with the traditions and responsibilities she has committed herself to. She reflects on the ups and downs of marrying young and the tragedy of losing children, on the efforts to understand who she has become in contrast to how she was raised, on how her health problems have changed her, on the psychological push-and-pull of being a performer and the unavoidable effects of consistent audience approval. .” (From Harper Collins)

The feedback of one member pretty much sums it up… “Well it wasn’t the worst book I’ve ever read”. Sadly we beg to differ.

So in the immortal words of Forrest Gump – That’s about all I got to say bout that.

What was lacking in the read was more than made up by the efforts of our  fabulous host. A wonderful spread of made from scratch goodies, in front of a toasty fire with a little mood setting opera in the background. Thank you Liz for a really lovely night.  And thank you too for picking this book – seeing Alison act out the quotes & excerpts was worth it!