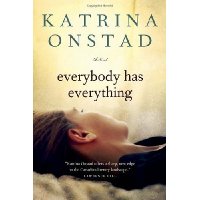 However we all felt the subject matter was very interesting – this could account for the great reviews it received from other sources (the only explanation we could come up with). Considering only 2 of our group have actually had children we may have brought a different perspective. Some of our group could relate completely to Ana’s character as she tried to come to grips with suddenly being thrust into the role of guardian for a 2 year old boy yet feeling nothing maternal nor nurturing. We talked about our own life decisions and the expectations of family and even co-workers.

The consensus was that there was no point to the book. Many of the storylines went absolutely nowhere – the visit to the bad sushi bar, the blow job in the back alley, the ending, the title…what the F#%K!!! Speaking of the word ‘F#%K’, Pam was kind enough to do a count and it was said 9 times throughout the meeting in various contexts by various people. Some had to do with the book.. some not. That’s just how we roll.

In addition to discussing the book we talked about Anthony Germaine and the CBC morning show – we’ll all be listening starting tomorrow! … ‘there’s a bucket on the ORR – here’s a snap for ya”. We also talked about Alison being robbed of her trip to Ireland (ROBBED I TELL YA!!), Pam’s deceased fish and the poor fish left to mourn, and DunderStruck gone viral. We also have our fingers crossed for Pam… Don’t let it be a computer glitch, don’t let it be a computer glitch…good luck girlie!

All of this great discussion could not have happened without the wine and the food!! As one of us said in mid discussion… ‘before we talk about anything else let’s talk about what all this food is called”… Yummmmmmy!!!! Thanks Alison!