What a night! As anticipated Lolita spawned quite the discussion. At one end were those who HATED it (“Bart Simpson wrote better!”) feeling that the author must have had the same desires as Humbert to write about the topic as he did. In the middle were those who found the subject matter very uncomfortable but thought it was well written and very funny in places – Humbert Humbert’s contemplation of drowning poor old Charlotte only to have her flattened as she ran across the street – a little Desperate Housewives perhaps?.. A few really enjoyed it despite (or perhaps because) of the feelings of discomfort it aroused. 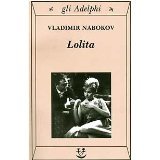 Pam rocked as our host with some great thought provoking questions and activites. Would our feelings have been different had the book been written in the 1800s or set in another culture? What role did Lolita (Delores) play in the seduction (abuse)? Did Humbert really love her? Why the hell did the author give him the name Humbert Humbert?!? How do we reconcile the rampant sexualization of young girls while discouraging their natural sexual expression?

In addition to the discussion these questions brought,  Pam had a number of provocative advertising images of young girls and asked us to guess the ages. Some were shocking with the models ranging from 6 years old to 14. These were followed up by actual statistic of when girls were ‘marriageable’ in various cultures and religious sects. Needless to say, with this group, all this did not occur in a straight line! There were a few detours…. 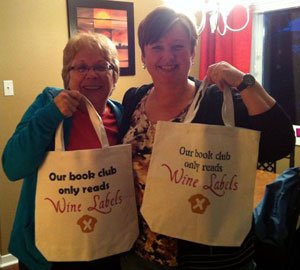 If you think the night couldn’t get better Krista used us as guinia pigs for her peanut butter & jelly cupcakes (YUMMY!) and Pam had very special prizes. She made 2 beautiful bags modeled after the one featured on our Facebook page several weeks ago and drew names for them. Toddy and Jennifer were the lucky winners! Aren’t the bags pretty? The prizes are cute too!

It was a fantastic night and the much anticipated discussion did not disappoint. Hats off Pam for fantastic food and for leading a wonderful discussion.