Despite being a small group tonight there was no shortage of discussion or opinions about this month’s read Midwives by Chris Bohjalian. A discussion that took place in the glow of twinkling Christmas light’s and a beautifully decorated tree.

With the exception of one of us, most enjoyed the story, the writing and the characters in this book. We thought all of the characters were very well developed and believable.   The lone dissenter felt the characters were unattached and clinical in their interactions with each other. She felt Sybil was too perfect and Connie too obnoxious for her to connect with.

The nurse among us recounted how in a personal crisis situation she automatically (& unconsciously) reverted back to her nursing training. Only afterwards did the emotions kick in. It was not surprising that Sybil would react in a similar way when the birthing went awry. Her inexperienced assistant may have not understood this. 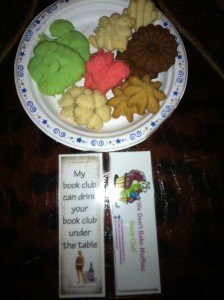 We all tended to agree that even if the mother had in fact been alive when Sybil did the cesarean she would not have survived until the roads cleared and help could arrive. Had Sybil not taken action both mother and child would have died. So her March 15th journal entry did not change anything for us.

Although, we were divided about whether or not Sybil had actually checked for a pulse and heartbeat while Asa and the assistant were out of the room as she said on the witness stand. Some thought it  was a deliberate lie and others thought a lie would not fit with what we knew about Sybil.

A great night was had by all. Some of us will certainly be checking out other books  by this author!

The food, the ambiance, and the hospitality were fantastic. Thank you Toddy for hosting a wonderful evening (we may need to check out the EPA website for curiosity). And thank you to Liz for the homemade Christmas cookie treats – you know they’re that now officially a tradition right?