We’re backkkk…. in fine style! What a fantastic back from summer book club meeting tonight. As expected everyone agreed that this was a great read with characters that we really liked.

There were a couple of issues that came up. The first being Uncle Stash & Mrs. Merkel’s doggy love over the kitchen table…. Alison was not happy about that! We did all wonder why it was there. Did Aunt Lovey know about it (there seemed to be some implication that she may have)? That possibility ticked Alison off even more! Pam wondered about the purpose of the Slovakia trip. It didn’t reveal anything new about Uncle Stash – Peggy hoped it would somehow explain the afternoon delight with Mrs. Merkyl, but nope.

In fact this book is full of loose ends… what really did happen to Rose & Ruby’s mother? Why the heck did Nick go to jail? What was the end like for Rose & Ruby? Were Nick & Rose in love? What became of baby Tyler?

Liz had lots of questions prepared but as usual the conversation(s) took on a life of its own (sometimes at the same time). We talked about twins, with their own bodies, who for some bizarre reason are compelled to live with a single identity – dressing the same, living a lifetime together, etc. Kelly wondered if any of us would want to be in that situation and Liz confessed her childhood fantasy of being joined (connected) to someone so completely, however not too connected, like by the tip of her finger or something. Peggy couldn’t understand why Rose didn’t get any credit for the artifact collection since it was her legs that Ruby used to crawl around on the ground to find them.

The highlight of our meeting was the incredible spread Liz had prepared for us.  She went above and beyond with a feast of Slovakian food in honour of Uncle Stash and the trip to Slovakia – Easter cheese (with a gazillion eggs), apple pudding, Slovakian soup & cheese sauces.  Not only did she cook things she had never heard of, but she used a double boiler, cheesecloth and other things that the non-cooks among us had never heard of!

The food, the company & the discussion was wonderful. 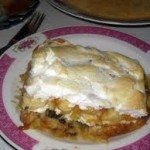 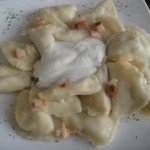 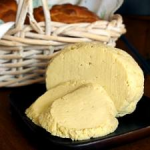